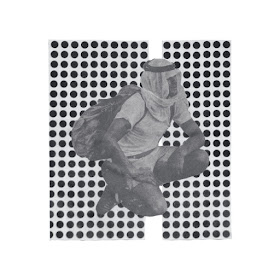 The inception of Ulrika Spacek is quite an interesting one. Long time friends Rhys Edwards and Rhys Williams came up with the idea for the band one night in Berlin, and formed the whole concept of their music, and even the title of their album, right from the start. That album was to be called 'The Album Paranoia', and after moving back to London and working on music that's inspired by krautrock and the fuzz-fuelled sounds of Sonic Youth, Television and Pavement, the ten-track project is complete and set for release in early February on Tough Love in Europe and Lefse in the US.

First single 'She's A Cult' has already gained some good press coverage and manages to stand out in a world that's not lacking in scuzzy guitar bands. There is a lot of grungy, distorted guitar and vocals that are buried underneath it all, but 'She's A Cult' also breaks for more spacious, twinkling segments that let the light in and bring a new dynamic to the song. With so much of this track being about the sound, it would be easy to forget that the basic song itself needs to be strong, but there's no such problem here, and both structurally and melodically this stands up well. Having ideas is one thing, but successfully carrying them out is quite another.